I recently re-read this great article on struggling from Sal Khan of the Khan Academy.  Many parents give into their children when struggling enters their extra curricular activities.  Karate is new and exciting and so much fun when they first start…much like when a couple first gets married!  But struggling a little can be a good thing!  Why?  Without adversity we can’t gain strength, confidence and perseverance!

Here is the article:

My 5-year-­old son has just started reading. Every night, we lie on his bed and he reads a short book to me. Inevitably, he’ll hit a word that he has trouble with: last night the word was “gratefully.” He eventually got it after a fairly painful minute. He then said, “Dad, aren’t you glad how I struggled with that word? I think I could feel my brain growing.” I smiled: my son was now verbalizing the tell­-tale signs of a “growth­ mindset.” But this wasn’t by accident. Recently, I put into practice research I had been reading about for the past few years: I decided to praise my son not when he succeeded at things he was already good at, but when he persevered with things that he found difficult. I stressed to him that by struggling, your brain grows.

Before you read the rest of the article please know that ATA’s teaching method is built upon this growth mindset approach!  When you watch our classes you will notice the instructors praising what the class or individuals are doing that is good but also challenging them to persevere in making their technique even better. 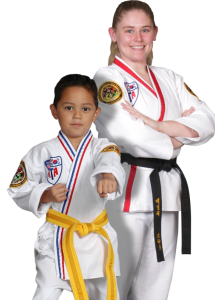 Researchers have known for some time that the brain is like a muscle; that the more you use it, the more it grows. They’ve found that neural connections form and deepen most when we make mistakes doing difficult tasks rather than repeatedly having success with easy ones.  What this means is that our intelligence is not fixed, and the best way that we can grow our intelligence is to embrace tasks where we might struggle and fail.

However, not everyone realizes this. Dr. Carol Dweck of Stanford University has been studying people’s mindsets towards learning for decades. She has found that most people adhere to one of two mindsets: fixed or growth. Fixed mindsets mistakenly believe that people are either smart or not, that intelligence is fixed by genes. People with growth mindsets correctly believe that capability and intelligence can be grown through effort, struggle and failure. Dweck found that those with a fixed mindset tended to focus their effort on tasks where they had a high likelihood of success and avoided tasks where they may have had to struggle, which limited their learning. People with a growth mindset, however, embraced challenges, and understood that tenacity and effort could change their learning outcomes. As you can imagine, this correlated with the latter group more actively pushing themselves and growing intellectually.

The good news is that mindsets can be taught; they’re malleable. What’s really fascinating is that Dweck and others have developed techniques that they call “growth mindset interventions,” which have shown that even small changes in communication or seemingly innocuous comments can have fairly long­-lasting implications for a person’s mindset. For instance, praising someone’s process (“I really like how you struggled with that problem”) versus praising an innate trait or talent (“You’re so clever!”) is one way to reinforce a growth ­mindset with someone. Process­ praise acknowledges the effort; talent­ praise reinforces the notion that one only succeeds (or doesn’t) based on a fixed trait.

And now here’s a surprise for you. By reading this article itself, you’ve just undergone the first half of a growth­-mindset intervention. The research shows that just being exposed to the research itself (­­for example, knowing that the brain grows most by getting questions wrong, not right­­) can begin to change a person’s mindset. The second half of the intervention is for you to communicate the research with others. After all, when my son, or for that matter, anyone else asks me about learning, I only want them to know one thing. As long as they embrace struggle and mistakes, they can learn anything.

Abbreviated from full article The Learning Myth on Khanacademy.org

The next time your child says that Karate is getting tough and you see them struggling, use the growth mindset approach to help them persevere!   Goals worth reaching like a Black Belt in ATA martial arts is more valuable if the journey has some obstacles that need overcoming!