Black Belt Academy is developing life skills that help kids in school, home, socially and so MUCH More in Surrey, BC and Newton, BC.

If you are looking for an activity where you or your family can:
IMPROVE your fitness and self-discipline
LEARN a practical method of self-defense
PARTICIPATE in a competitive sport
ENJOY a unique recreational activity

On July 14th, our Academy Director tested in front of several ATA Grand Masters at World Championships in Phoenix Arizona. On the 8th day of the 8th month this year, Sr. Master Karpiuk received his 8th Degree Black Belt. We are proud of not only his personal accomplishment but the example he has set for his students to follow. Master Karpiuk has several 7th, 6th, 5th, and 4th Degree Black Belt students and Masters that continue to push him on his journey of Faith and martial arts.

On June 17th 2005, Scott Karpiuk received his Mastership Title from Grand Master Soon Ho Lee and the World Traditional Taekwondo Union. Master Karpiuk was a member of the largest mastership class in ATA’s history, and is the first ever Master from Canada. The induction ceremony took place during Opening Ceremonies for World Championships in Little Rock Arkansas. Over 10,000 spectators witnessed this historic event which centred around the 50th Anniversary of Taekwondo.

Master Karpiuk started his training at Baptist Bible College, Springfield Missouri in 1984. In addition to martial arts training, Master Karpiuk graduated with an Education Degree from the college. He received his Taekwondo instructorship in 1987 while attending the first ever Instructor’s Camp in South Korea.

With over 30 years of experience in martial arts, in addition to a degree in secondary education, Senior Master Karpiuk is known for his excellence in instruction, and his ability to bring out the best in his students.

Master Karpiuk has traveled extensively across the United States, to the Philippines and Europe teaching and demonstrating Taekwondo. As an original member of the Breaking Point Demonstration Team, Springfield Missouri, he has used martial arts as an opportunity to speak to young people about making positive life choices and how to deal with drugs, alcohol and peer pressure. Master Karpiuk was instrumental in bringing Grand Master Lee’s style of Taekwondo to Canada.

Senior Master Karpiuk has operated successful schools in the Lower Mainland since 1991. Many of his students have followed in his footsteps and have also opened schools in Fraser Heights, Delta, Langley, Walnut Grove, Richmond and Cloverdale B.C.

Senior Master Karpiuk is married to his wife Susan and together they have four boys and one girl. He gives credit to his success to his faithful students, his loving family and his personal relationship to the Lord Jesus Christ. 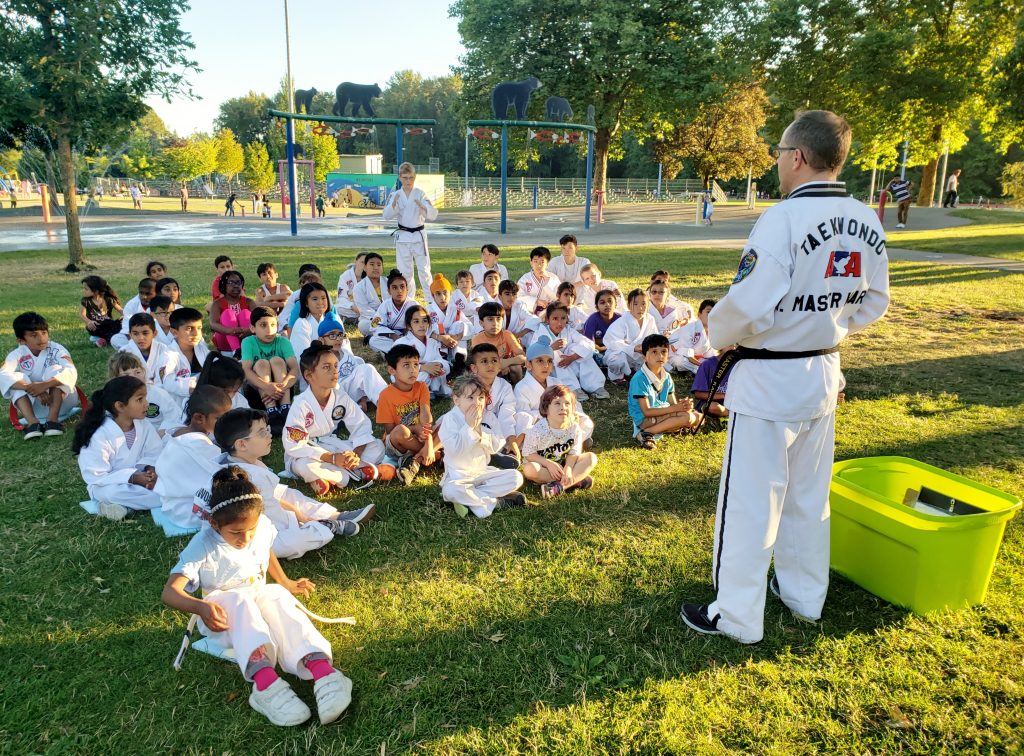 Welcome To The Exciting World Of Martial Arts Leadership!

Black Belt Academy trains men, women, girls and boys in Korean Karate, also known as Taekwondo. We help our students to develop the self-confidence, the discipline and the skills to become who they were born to be. In all our Programs and Classes, it is our goal to develop student’s character as well as developing their skills. Our Instructors are dedicated and trained to maximize their motivation, interest and enjoyment! Our Leadership Program has helped developed students into teachers, lawyers, entrepreneurs and many other successful walks of life!

Our staff are dedicated to the healthy development of children, teens and adults. The Karate for Kids system is designed to teach lifelong learning skills as well as technical skills.

We have a reward system that improves children’s self-esteem. Our program teaches them discipline and focus while obtaining self-defense skills including Bully Prevention and Stranger Danger! Our low student to instructor ratio promotes a healthy learning atmosphere and allows family members to train together!

See What Our Community Members Say About Our Programs

Read All Of Our Reviews

Your attention is required

Your attention is required

Please Leave Us A Review